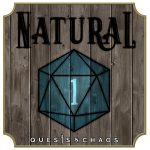 Natural 1 is a more realistic take on Dungeons and Dragons in a world where magic is tightly controlled and rogue magic is punished severely.

The story follows a group formed on the ship, Angle’s Valor, when they were attacked by a huge Kraken as the sky split open and a celestial being entered the world. The group has been working to get back home after the ship wreck left them stranded on a pirate island.

Set in the world of Rasmorae, Beau C. Williams leads a group of adventurers through a gritty world where magic is heavily controlled, and no one is to be trusted.