A perpetual player until joining Quests & Chaos, James Aaron Oh’s D&D adventures began with a brief introduction with 3.5 edition, but didn’t get his true start until 4th edition. It wasn’t until he played 5th edition however that he realized 4th edition was not so great.

Through DMing Dragon of Icespire Peak, James has been enjoying creating a version of the Forgotten Realms with a little James spice. He is constantly entertained and humbled by the world building process and immensely grateful for the awesome players that give his world life. 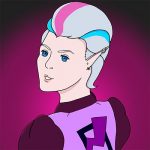 Darjaan ‘DJ’ Kindreth is from the middle strata of Moon Elf nobility in Silverymoon.  As a youngster, they were an exceptional actor-musician with a comfortable place at the Bard Academy.  But, all the shenanigans caused by the upper echelons of society were too much for them to take. So they started playing gigs around the towns giving them access to all the food, funds, adoration, intrigue, and gossip they could handle, culminating in an invitation to join the smugglers network.  Of course! Why Not!
Then one of these gigs/smuggles turned into a tavern-fight, and DJ slipped some money to a mercenary, recognized from previous smuggling operations, to help get away and keep safe.  This turned into a partnership with Tim, and they’ve been working together ever since.  DJ and Tim go from town to town, using the gigs as cover for smuggling ops, as well as picking up other objects of value, singing about them in the taverns, and then selling these items for extra cash.  Shhhhhh… It’s our little secret! 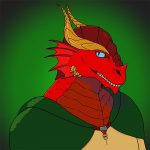 Inqua ‘Sheridan’ Jarbor prefers his farmer lifestyle to questing; but his ranger skills have definitely helped him to cultivate some of the best crops out of Goldenfields.  Born to one of the most notorious Dragonborn mercenary families in Dambrath as ‘Sheridan’, his kind heart and aversion to unnecessary violence eventually clashed with his father and brothers’ ideals.

After leaving his family at 15, a chance encounter with a group of elves on the run led to an unlikely bond in which he learned many elven skills, how to commune with nature, and was bestowed the name ‘Inqua’ for his calm and open minded nature.  Inqua is independent by nature, but never passes up a party that appreciates a good joke, a delicious meal, or a long game of Dragonchess. 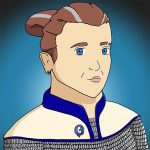 Isolt Agyris is a human paladin of Lurue and a lifelong member of the Knights of the Unicorn. An older woman, she is steady and calm in trying circumstances, but is always ready to stand as the fierce sword and protective shield for those who cannot protect themselves. She became a paladin shortly before Wynnleigh came into her life, and she believes her purpose as a paladin is to help guide this young cleric in the ways of the Goddess. 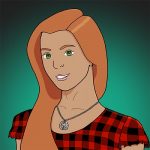 Wynnleigh Glorybowis a Life Domain Cleric-in-training, harnessing the power of the Goddess Lurue. The daughter of the Dalelands’ most famous (and lucratively successful) healers in the region, Wynnleigh carved out her niche by treating the community’s aesthetic ailments such as bad breakouts and split ends. She has even amassed scores of fans through her Faerugram account and FaeTube channel Unicorn Beauty. After discovering that she has the potential to heal much more than the errant pimple, Wynnleigh decided to leave her homeland to learn how to better channel and serve Lurue. With a cheery disposition and eye for beauty, she’ll be the first to compliment your outfit and warn you, “frowning causes wrinkles!” 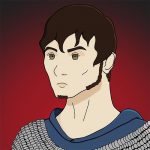 Tim “Tiller” Cresword
After the War of the Silver Marches, Tim resorted to falling in with a less than savory crowd to get by, acting as a look out, and then as muscle as he got older. A couple of years ago he came across Darjaan, whom he had worked with before, and they decided to go into business for themselves.

Check out the Podcast