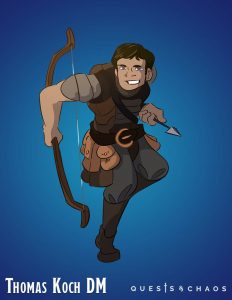 Thomas began his journey into Dungeons & Dragons in the early eighties at a very young age.  It was definitely more “Roll Playing” than “Role Playing” through 1e Dungeons and Dragons.  He has played every edition (except 4th) and loves the rules and freedom that 5e brings to the the table.

Andraste Naïlo is a Light Domain Cleric, serving the goddess Lliira. She hails from the High Forest area. As a Light Domain Cleric, her primary concerns are bringing the light to dark places and serving the interests of her goddess. She tends toward being quiet, but does not hesitate to be blunt when the situation calls for it. Having been raised in the forest as part of a small tribe, she doesn’t always understand the social mores of the area, but always strives to repair any offense if she causes it. 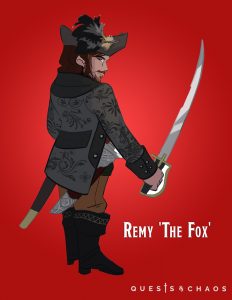 Remy ‘The Fox’ is a charismatic, swashbuckling rogue. As an urban bounty hunter, he makes a living off of turning in criminals and debt dodgers. Before all that, he was a pirate…but shhh, don’t tell anybody ;). He hopes to make enough coin to eventually return to the sea and captain a pirate crew of his own.

He has often caught sight of a particular large bounty that has always eluded him (his white whale), but never deterred, Remy presses on in his pursuit of this big score that will allow him to buy his vessel and live out his dreams at sea. HAVE AT THEE! 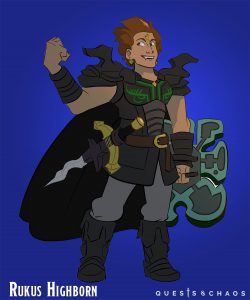 Rukus Highborn is a Daring (and Ex-Noble) Soldier looking to Reap what Others have Sowed, from his past. He is quite the clever talker when it comes to getting what he wants but as confidant as he is no one else around him is ever fully sure his plans aren’t too crazy enough to work, but damnit all if he isn’t so convincing. Rukus having completed his training, now goes out into the world to seek his vengeance on the ones who burned his family home and the bastard who hired them to do it. But he’s gonna have one hell of a time while he looks for ’em. And DEFINITELY When he finds them(wink). 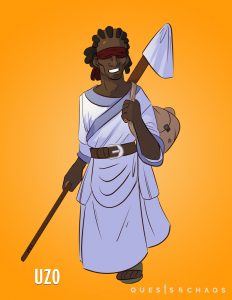 Uzo is a human warlock by trait, but a vagrant by lifestyle. Uzo sleeps rough nightly, but is not bothered by this in the least since it helps him earn a generous beggars living in addition to the loot he swipes from the pockets he picks throughout the city almost nightly.  His only travel companion is a non-poisonous small black garden snake he named, Baga. Uzo is ‘blind’ meaning his eyes don’t work in the traditional/literal sense, but he sees injustice in the street everywhere, and even though he steals from people – he never takes from those who can’t spare a loss. The balance in this world is skewed towards those with privilege, Uzo likes to think of himself as the counter-weight – with contempt for the privileged. Mostly using his skills abilities when necessary to balance the scale for the ones who can’t balance it themselves.

Check out the Podcast